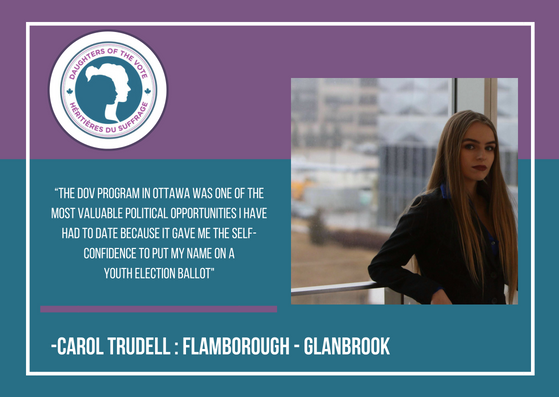 Carol-Jean Trudell represented Flamborough - Glanbrook as a delegate in 2017. Since then CJ has graduated from the University of Waterloo with a Degree in Legal Studies. In fact, she graduated one year early and recived the UW Legal Studies 2018 Departmental Award for Distinguished Academic Achievement.

“As for what's next, I'm excited to be wrapping up my year-long campaign for the First VP role within the Ontario PC youth wing at the end of next month. Also, I will be writing my LSAT and applying to law schools this Fall,” said the daughter in June. “In the new year, I aspire to return to volunteering more with a focus on educational and political causes while gaining work experience in a new city.”

“The DOV program in Ottawa was one of the most valuable political opportunities I have had to date because it gave me the self-confidence to put my name on a youth election ballot,” said the VP.  “Not only did the DOV programming take the necessary steps to explain why it is and continues to be crucial for young women to put their names on election ballots without being asked but, the policy workshops and seminars discussed some of the genuine barriers women face in attempting to become a candidate.”

Please check your e-mail for a link to activate your account.