Where are they now? Anne Marie Arko 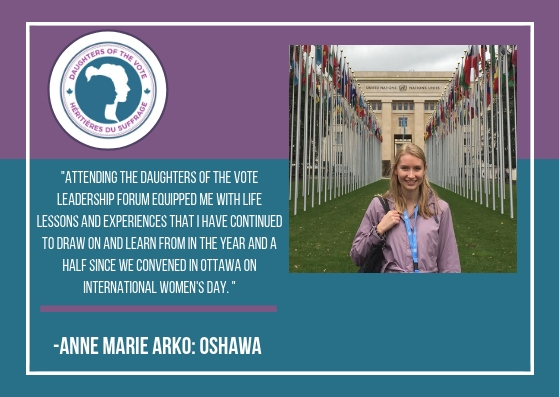 Anne Marie is starting law school at University of Ottawa this September. She fulfilled her personal dream, working in legal and political affairs at the United Nations Environment Programme while living abroad for half a year in Geneva, Switzerland.

“Since the Forum I have boldly taken on many new experiences in the professional sphere of politics, policy, and law as I transitioned into the workforce.”

Anne Marie was actively involved and help shaped Canada’s international agenda. She worked with Canada's International Climate Change Negotiation team and supported Canada's delegation abroad at the intergovernmental climate negotiations for the Paris Agreement. Anne Marie reflected on the realities of women around the world from her international experience.

“I'm excited by the challenges and opportunities that lie ahead. I'm also looking forward to reconnecting with Equal Voice while I'm living in the capital region of our amazing country!”

Alana Robert is in her final year of Juris Doctor studies at Osgoode Hall Law School, where she is the Co-President of the Osgoode Indigenous Students’ Association.

Representing Equal Voice, Alana was part of Canada’s official delegation to the United Nations Commission on the Status of Women in New York where she advocated for policies that empower rural women. As a National Network Leader on Gender-Based Violence for Equal Voice, Alana led the development of a toolkit to mobilize youth across the country to advocate and lead solutions that serve to combat gender-based violence in their communities.

"The Daughters of the Vote program through Equal Voice has allowed me to be part of an incredibly uplifting and supportive network of women. Equal Voice supported my nomination to be part of Canada’s delegation to the United Nations Commission on the Status of Women, where I represented the organization in New York," said Alana. "At the Commission, I was able to elevate the reach of my work on combating gender-based violence. I am thankful that Equal Voice has continuously provided a platform for young women’s voices to be heard"

Alana founded Justice For Women in Manitoba, which addresses gender-based violence on post-secondary campuses through education, policy, and support for students. She has testified on this work to the House of Commons Standing Committee on the Status of Women.

As an anti-violence and MMIWG2S advocate, Alana regularly speaks at events across Manitoba and Ontario. She has previously interned at the United Nations International Criminal Tribunal for the former Yugoslavia, where she worked on victim and witness protections.

As part of the 16 Days of Activism, Daughter of the Vote for the riding of Burlington, Emma Fisher-Cobb, is speaking directly to young women through the Girl Guides of Canada.  Emma says that while violence against women may seem like a grown-up topic, it is important to engage young women, many of whom are already dealing with harassment and violence. As a guider, she leads girls in a “say no to violence” program to teach them about their own power to say no, and stand up for themselves and others. She has also worked with her Guides to support the local sexual assault centre, with self-care kits, supportive messages, and community service.  See more about Emma’s work here.

On March 8, 2017, while sitting in the House of Commons, delegates took the opportunity to raise the issue of violence against women in Canada in front of Prime Minister Justin Trudeau, members of all parties, and the Right Honourable Kim Campbell. Watch their statements.

Daughters of the Vote Testify To Status of Women Committee

During the historic week of Daughters of the Vote, five delegates testified to the House of Commons Standing Committee on the Status of Women. Watch their testimony or read the report.